More than 150 University of Georgia students attended a forum on marijuana decriminalization last night hosted by Georgia C.A.R.E. affiliate Athens C.A.R.E.. Organized by Josh Wayne and his team, the students heard from various cannabis reform activists on plans to lobby for reform in the city of Athens and the state of Georgia. Georgia C.A.R.E. director James Bell said the event was a huge success and was happy with the reception from students.

“Our goal is to make cannabis reform a real issue to students. This is not a pipe dream. It’s a real effort run by real people who want real change. We are not criminals and the citizen of Georgia should not be treated as criminals”, Bell said. 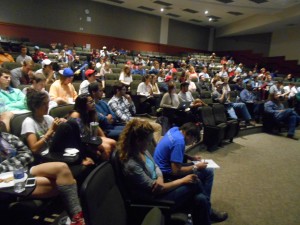 This is Athens C.A.R.E.’s second year on campus and the movement continues to grow. More events are planned in the future