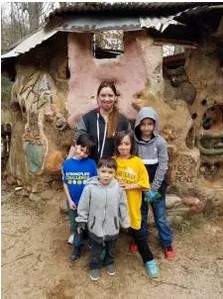 Here at Georgia CARE, we love to share stories of people who are making a difference in the fight to legalize cannabis for medicine. Mothers and fathers all over Georgia are risking their freedom to help improve the lives of their children with cannabis oil.

As we go through the legislative process many have come forward to share the most personal aspects of their lives in an effort to educate lawmakers about the miracle medicine we call CANNABIS.

Bridgett Liquori is an outlaw, not that you’d know from looking at her. This petite 34-year-old single mother’s crime? She loves her children and is risking everything to keep them as happy, safe and healthy as possible.

If that means breaking  state and federal laws to get the medical cannabis her kids need to treat their daunting illnesses, then so be it.

“I never thought I’d be a marijuana activist,” says the self-described “Canna Mom” from Gwinnett County. “But this is about my kids so I really didn’t have much choice.”

Liquori is part of grassroots movement devoted to reforming Georgia’s restrictive and nonsensical medical cannabis laws. In between taking care of her kids, Liquori spends time testifying at the state capitol, working with pro-marijuana groups such as the Georgia CARE Project and writing her own blog about the benefits of medical cannabis. She’s also keeping a nervously watchful eye on how the newly minted Trump administration will handle the marijuana industry that’s growing like a weed nationwide.

A native of upstate New York, Liquori did not come by her marijuana activism easily.

“I was scared,” she said while watching her kids play at a park in Oakhurst on an unseasonably warm Saturday morning. “I was afraid of someone coming to my house and taking my kids away because I’m doing something illegal. Even though (medical cannabis) is beneficial and helpful to them, the fear was there. A lot of days it’s still there. I worry if someone is going to kick my door in.”

Ransom told the mayor and council she wants the city to consider replacing the current marijuana ordinance with one similar to the city of Clarkston. She suggested that meetings occur over the next several weeks to discuss the details of the ordinance and expressed her concerns that the current ordinance is to harsh at $1000 fine and 180 days in jail.

Her proposal was received with head nods and applause by some council members and citizens.

The state constitution allows cities to create an ordinance for one ounce or less, enabling the cases to be adjudicated in municipal courts. While state law for misdemeanor possession carries a penalty of up to $1000 fine and 12 months in jail or probation, cities are restricted to 180 days confinement under a city ordinance. The constitution does not set a minimum sentence a city can impose.

Clarkston made headline news last summer by enacting an ordinance that sets a $75 fine for each offense of possession of one ounce or less of cannabis, eliminating the requirement to arrest and incarcerate the suspect.

Temple is one of the cities being targeted by the “City by City Initiative” established by the Georgia CARE Project in an effort to reduce the harm marijuana laws create.

James Bell, director of Georgia CARE , said cities that enact reform legislation are mirroring public opinion that people should not be treated as criminals for possession of small amounts.

No criminal record would be generated under this ordinance.

“Cities can handle these cases without criminalizing its citizens and visitors to their city”, said Bell. “A person would receive a citation and agree to appear in court or pay the set fine without being arrested, booked, photographed and finger printed like a criminal.”

Bell points out the proposed ordinance would not effect the ability of police to arrest for intent to distribute or driving under the influence. State law would be used in these cases.

We will update this report as the process moves forward.