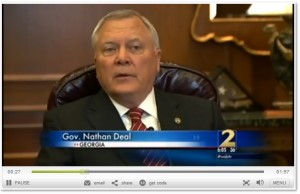 As state officials try to put a positive spin and what appears to be a rejection of medical marijuana by Georgia Gov. Nathan Deal, advocate are circling the wagons and accessing their next move.

Georgia C.A.R.E. will continue to fight and advocate for legal marijuana and medicine for these in need.

Atlanta GA: Advocates for the reform of Georgia’s marijuana laws praise the Georgia legislature and Gov. Deal for the passage of historic criminal justice reform legislation just signed into law (HB-349) (HB-1176. 2012). The Georgia Campaign for Access, Reform & Education (Georgia CARE) is one of the reform groups following the legislation. Georgia CARE advocates for marijuana law reform and believes Georgia is better off regulating marijuana like alcohol and tobacco.

James Bell – director of Georgia CARE said that state officials have acknowledged we can not afford to lock up non-violent offends for low level crimes. While Bell applauds the recent reform, he said the legislation falls short on how to deal with those who use marijuana.

“We feel the state should establish and decriminalize personal use amounts and remove prison time for simple possession and use”, Bell said. “If we all agree we can’t lock away marijuana users in prison why have laws on the books that can incarcerate citizens for up to ten years”, Bell asked.

Georgia CARE will work with the state of Georgia in establishing reform legislation that reduces the harm marijuana laws causes its citizens. Marijuana laws are antiquated and draconian and must be reformed, Bell said.

As a start Georgia CARE would like to see the felony amounts moved up to 2 or 4 ounces. Currently possession of more than one ounce is a felony and carries a penalty of up to ten years in state prison.

“We should treat marijuana like alcohol or tobacco and regulate personal use amounts. The legal drugs have proven to be far more harmful than marijuana yet we continue to treat marijuana like plutonium rather than wine”, Bell said. “Money saved not prosecuting marijuana case can be applied to drug and alcohol treatment programs for those who truly need it.”

Another reform issue on Georgia CARE’s agenda is expanding the medical marijuana laws that the Georgia General Assembly unanimously passed in 1980 and signed into law.