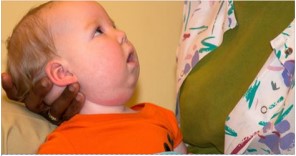 Kason Jiles, who celebrated his first birthday last October, is learning to sit up and eat.

That may seem normal for a tot his age, but Kason has a very young life that is not so normal. He has a neurological disease called Ohtahara Syndrome that is characterized by seizures that can number from 10 to 75 a day.

Many infants with Ohtahara Syndrome do not even make it to their first birthday. But Kason is beating the odds, according to his father Jonathan, who says Kason is improving lately with only a few seizures a week.

Jiles, a Villa Rica resident, said his son is on a special ketogenic diet, and some changes to his medication regimen have helped. Another thing that could help Kason is cannabis oil. It could reduce his number of seizures and improve his quality of life dramatically.

Medical marijuana nearly passed the Georgia General Assembly in 2014, but got caught up in political wrangling in the final hours of the 40-day session.

As legislators get ready to head back to Atlanta for the start of the 2015 session Monday, there are already several bills being talked about that could legalize cannabis oil and give the Jiles family and others like them the relief they’re looking for.

Jiles said last month that he prefers Senate Bill 7 over the House Bill 1.

“After reading HB 1, I am somewhat disappointed in what I have read so far,” Jiles said in an email recently. “Nearly all Georgia families currently in Colorado are presently using THC alongside CBD oils to control seizures. I believe HB 1 as written is too restrictive to be effective legislation for Georgia families. Sen. Curt Thompson, D-Norcross, has pre-filed a bill, SB 7, which I believe is much closer to the legislation that exists in states where Georgia families are currently moving to provide life-saving medication to their children.”
Jiles’ comments came before changes announced late last Friday by HB 1’s primary sponsor, Rep. Allen Peake, R-Macon.

In a press release, Peake said he met Friday with Gov. Nathan Deal regarding his medical cannabis legislation.

“I have been in intense conversations with the governor over the last several days about HB 1, and I view today’s progress as a huge step in the right direction,” Peake said. “After much discussion, it is clear that we need to conduct more research on setting an in-state growing scenario in order to provide the best and most effective infrastructure for our citizens. Last year, I made a promise to bring our families home and to give Georgians a chance to obtain cannabis oil in our state without fear of prosecution, and this has remained a priority. The changes that we have agreed upon for HB 1 vary slightly from the original version, but the bottom line is that we will be bringing Georgia families back home.”

Proposed changes to HB 1 include immediate decriminalization, upon the governor’s signature of HB 1, for possession of cannabis oil containing between 3-5 percent THC for individuals with certain medical conditions who have obtained the cannabis legally in another state. Also included in the changes to HB 1 is the creation of a council whose sole charge will be to examine the future establishment of a regulatory model for an in-state growth and distribution infrastructure in Georgia. The committee will also be charged with making its recommendations to the General Assembly by Dec. 31, 2015.

“With this news, I am happy to say that our medical refugees in other states can start packing to come home and reunite with their families,” Peake continued. “Once the updated legislation is formally introduced and passed by both House and Senate chambers, decimalization would be effective as soon as the governor signs HB 1 into law. Families in Georgia who are seeking medical cannabis will now be able to go to another state to legally obtain the treatment and then come back home without fear of being prosecuted in Georgia. The Journey of Hope Fund will still be operating to help Georgians travel to other states to legally obtain this treatment. We are headed down the right path in Georgia, and I thank Governor Deal for his support of this newly proposed version of the legislation.”

But while Peake lauded the proposed changes to HB 1, Jiles said Saturday the changes only strengthen his support of SB 7.

Representative Peake’s statements that Georgia families will now ‘be able to go to another state to legally obtain the treatment and then come back home without fear of being prosecuted in Georgia’ ignores the fact that doing this is against both federal drug trafficking laws as well as against the law in Colorado. This does not even address the fact that dispensary owners in Colorado will not sell to those who they know are living out of state, thereby requiring the patient to lie about their address to a dispensary, which, like taking cannabis outside the state, is against Colorado law. It is also noteworthy that through the act of taking medicinal cannabis outside the state, the patient is putting the license of the dispensary at risk.
Jiles continued: “I have no desire to be encouraged to be a drug runner, when the possibility of having medicine in a controlled environment can happen right here in Georgia.”

“Few would disagree that physicians need every good tool in their medical toolbox to provide the best health care possible to their patients,” Thompson said. “Whether that tool is a new diagnostic test, a new antibiotic or a form of proven pain reliever, doctors need the ability to provide the best possible short and long-term health care for their patients. SB 7 is designed to do just that.”

Thompson’s SB 7 would allow doctors to prescribe marijuana of up to two ounces for specific debilitating medical conditions, including: cancer, glaucoma, HIV/AIDS, hepatitis-C, ALS, Chrone’s Disease, Alzheimer’s and chronic or debilitating conditions that cause Cachexia (wasting syndrome), severe and chronic pain, severe nausea and seizures/muscle spasms from epilepsy or MS. SB 7 also includes a number of common sense limitations and guardrails for dispensing the drug. Marijuana, like any other prescription drug, would be regulated.

In addition, Thompson has filed Senate Resolution 6 to advance the conversation of marijuana use. This constitutional amendment, if approved by voters, would legalize, regulate and tax the sale of retail marijuana through licensed establishments. The tax collections would be constitutionally earmarked for education and transportation infrastructure. Many other states have passed similar measures.

Thompson said SR 6 provides an opportunity to regulate sales and to make available another revenue stream without raising existing taxes.