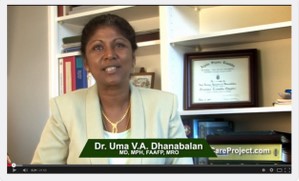 Georgia C.A.R.E. is proud to release the first of a series of video interviews concerning the use of Cannabis as medicine (medical marijuana). In this release “Dr. Uma”  ( Dr. Uma V.A. Dhanabalan, MD, MPH, FAAFP, MRO ) gives an overview of her involvement in treating patients with cannabis. This project was produced by James Bell director of Georgia C.A.R.E. for educational purposes.

“I hope that the knowledge shared by Dr. Uma will open the eyes of many who are interested in healing and the relief of pain and suffering. Cannabis is a very old medicine that has benefited mankind for millennia. Education is the key to getting the medicine to the people who need it.” James Bell