In 2015, Georgia medical marijuana law changes when Governor Nathan Deal signs the Haleigh’s Hope Act on April 16, 2015. This is Georgia’s first serious attempt to craft meaningful medical marijuana legislation. With the signing of this new law, which many lawmakers consider an experiment of sorts, comes stringent rules and regulations that govern who is eligible for medical cannabis oil and how the program is administered. In addition to the rules listed below, this legislation also gives the green light to Georgia universities to create study programs specifically for the treatment of pediatric seizures disorders. The law also creates a commission for the purpose of examining the law and making recommendations for changes to the Governor.

In summary: Georgia medical marijuana law does not legalize the production or sale of marijuana, it simply decriminalizes its possession by certain qualified individuals.

Georgia medical marijuana law only provides protection from prosecution if a qualified patient possesses a legal amount of oil. There is no provision in Georgia law that suggests how a patient might actually obtain medical marijuana.

In order to qualify for exemption from prosecution for possessing medical marijuana oil in Georgia the following conditions must be met:

In order to qualify for exemption from prosecution for possession of marijuana oil in Georgia the patient must have a diagnosis including one of these qualifying illnesses:

When can I register for medical marijuana oil in Georgia?
The Georgia Department of Health will begin issuing certifications on or before September 1, 2015.

Where will I get marijuana oil from once I have received my certification?
Georgia law does not address where patients will obtain their medicine from. It only exempts them from prosecution if they are found to be in possession. Most patients order their medicine from a reputable producer in a state where the production of marijuana for medicinal purposes is legal. It is very important to order only from producers who have their product tested and properly labeled.

What if I get caught with low THC oil but I am not a registered patient?
Georgia state law considers possession of 20 fluid ounces or less a misdemeanor and over 20 fluid ounces a felony. It remains uncertain if law enforcement cares enough about low THC oil to arrest and charge someone for possessing a small amount. Of the hundreds (perhaps even more) Georgians that already use low THC cannabis oil, there has not yet been a reported prosecution for possession of a small amount. Low THC oil has already been classified by the federal government as something not worth worrying about. 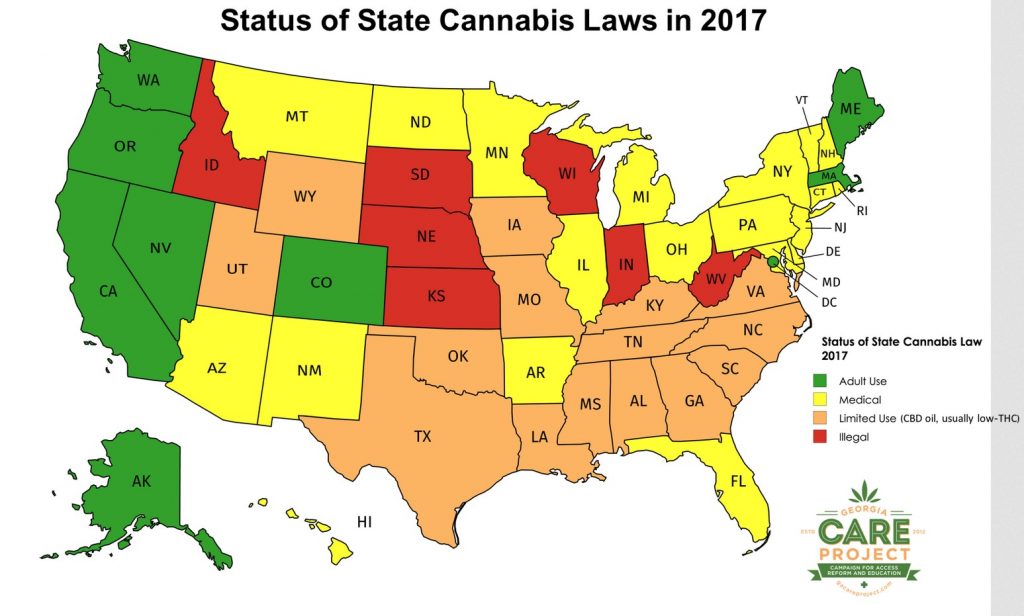 History of Medical Marijuana in Georgia

In 1980, the Georgia General Assembly unanimously passes a medical marijuana research act, (Controlled Substance Therapeutic Research Act – (Code 43-34-120). This makes Georgia one of the first states to recognize the medical benefits of marijuana. With support of Lt. Gov. Zell Miller, House Speaker Tom Murphy, Rep. Virlyn Smith, and Governor George Busbee, this landmark legislation opens the doors to therapeutic cannabis. However, the law relies upon federal cooperation and supply. This renders the law cumbersome and ineffective in accomplishing its goal to further the research into the benefits of medical marijuana.

Note: In Spillers v. Georgia 245 S.E. 2d 54, 55 (1978), the State Court of Appeals rules that the lack of any recognition of marijuana’s medical uses by the state legislature precludes the court from allowing the medical necessity defense.